The Time Has Come to Pull Down Some Strongholds.

2 Corinthians 10:3-6 NKJV
For though we walk in the flesh, we do not war according to the flesh. For the weapons of our warfare are not carnal but mighty in God for pulling down strongholds, casting down arguments and every high thing that exalts itself against the knowledge of God, bringing every thought into captivity to the obedience of Christ, and being ready to punish all disobedience when your obedience is fulfilled.

Ephesians 3:8-13 NKJV
To me, who am less than the least of all the saints, this grace was given, that I should preach among the Gentiles the unsearchable riches of Christ, and to make all see what is the fellowship of the mystery, which from the beginning of the ages has been hidden in God who created all things through Jesus Christ;  to the intent that now the manifold wisdom of God might be made known by the church to the principalities and powers in the heavenly places,  according to the eternal purpose which He accomplished in Christ Jesus our Lord, in whom we have boldness and access with confidence through faith in Him.

These songs we sing are more than pleasant, memorable tunes with clever words that rhyme; they are weapons in the hands of mighty warriors. These prayers we pray are more than incantations mumbled under our breath; they are the modern versions of the clay pitchers and ram’s horn trumpets of Gideon’s army.  Their light and sound can cause stone walls to crumble.  These scriptures we quote in faith are not harmless antiquities passed on from loser to loser in some vain, forgotten hope; they are the words of the Almighty, alive and throbbing with spiritual power to do spiritual warfare against spiritual forces.  Do we understand or do we remember that worship is spiritual warfare?  Worship is not a weapon in this battle; it is the battle itself.  In prayerful worship and worshipful prayer, we engage the enemies of life itself who have bound together in a cult of death, determined to isolate and eliminate people from this earth sending them to hell forever estranged from the God who made them and loves them still.

The Weapons of Our Warfare
Paul’s militant words to the Corinthian church must inform our thinking today.  “The weapons of our warfare” are mighty through God to the destruction of the enemy’s battlements.  We must never forget that these weapons are not “carnal,” that is, they are not human, not of this earth, not results of the creation acts of God.  They are rooted deeper than creation and higher than humanity. They are sourced in the Throne Room of God, the Heavenly Zion that set Mt. Sinai ablaze and set the face of Moses a-shining.

These things, and more like them, are the weapons of our warfare.  They are mighty—through God!—to the utter destruction of anything the enemy can build in opposition to us.  So, just what are these weapons?

Visiting the Arsenal
Many years ago in my first book, Worship that Pleases God, The Passion and Reason of True Worship, I concluded that book with a chapter on Spiritual Warfare.  Here is an updated version of the visit to the Arsenal from that book: 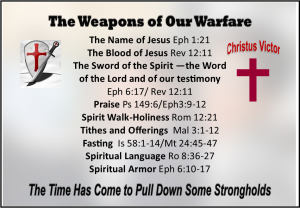 The truth is, hell has no defense against these weapons.  Here is the biblical promise:

James 4:7-10 NKJV
Therefore submit to God. Resist the devil and he will flee from you. Draw near to God and He will draw near to you. Cleanse your hands, you sinners; and purify your hearts, you double-minded. Lament and mourn and weep! Let your laughter be turned to mourning and your joy to gloom. Humble yourselves in the sight of the Lord, and He will lift you up.

The Ammunition in our Weapons
The second scripture passage above concerns two things that we need to understand if our weapons will be able to do their assigned work. If worship is indeed spiritual warfare, we must

The passage in Ephesians 3 is one seldom seen as instruction in worship but it is vital.

…to the intent that now the manifold wisdom of God might be made known by the church to the principalities and powers in the heavenly places, according to the eternal purpose which He accomplished in Christ Jesus our Lord…

Here is what we learn from this paragraph:

Our worship must be chock full of the truth about the Lord, not our feelings, not our ambitions, not our earthbound fantasies, but the real, eternal, supernatural, overcoming, proven, undisputable facts about God, Father, Son, and Holy Spirit.  In the Bible every time a scene from the throne room of God is recorded, the hosts of heaven are busy telling all around who God is: “Holy, Holy, Holy! the whole earth if full of His glory!” “Who was and is and is to come.” “Worthy is the Lamb of God who takes away the sins of the world.” The Weapons of our warfare should be loaded with this level of ammunition. Satan and his hosts have no shelter from this bombardment.

Understanding the Combat
To help us understand the warfare that is True Worship, I will quote extensively from Worship that Pleases God.[1]

To understand the biblical illustrations of Spiritual Warfare we must think of war as it was fought in the Bible era.  In ancient times, before it became the province of machines, warfare pitted soldier against soldier with few weapons that did not depend upon the arms and legs of the warrior or his animal.  Ancient armies waged three basic types of warfare.

The Personal Raid   Private prayer is like a personal raid on the enemy.  You and all the heavenly raiders you can summon strike off behind enemy lines in a sequence something like this:

You have entered Satan’s territory (the heavenlies) and you are resisting him, disrupting his communications with perfected praise and petition.   Strongholds begin to crumble as hell’s forces are weakened. The Kingdom of God is advanced!

The Assault  Public worship is like a pitched battle, an assault by a huge army on a strongly defended enemy position.  When a body of believers gathers for worship in their city, they are actually assaulting the powers and principalities “over” that city.

The forces of darkness retreat before the forces of light.  The Kingdom of God is advanced!

The Siege  Daily, joyful craftsmanship is like a siege.  The army of God fans out to each soldier’s appointed position along the line of siege.  Some are teachers, others students; some are salesmen, others purchasers; some are managers, others the managed; each one a soldier on the line of siege.  Heretofore we may have thought that though we feel like a mighty army on Sunday, on Monday when we go out into the world we are really an outnumbered force.  Actually, we have got the devil surrounded!  As we joyfully live our lives of craftsmanship unto the King we lay siege to Babylon.

Yes, we are priests, but we are also prophets of the eternal Word who proclaim the manifold wisdom of God through our praise.  Yes, we are worshipers, but we are also warriors raiding the enemy’s territory with our private prayer, assaulting his strongholds with our public worship, and laying siege to his capital city with our daily craftsmanship.  Hell has no defense for a passionate, praying, praising, obeying, reasoning church!  Behold the powerful ministry of the believer whose life is centered on God Himself! 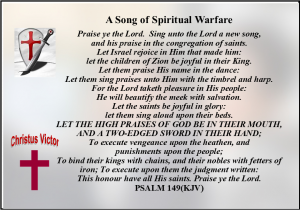 If your idea of a public worship service is more in line with an entertainment for the family or pleasant, refreshment of your soul, please seek the Lord for a greater vision.  Worship is warfare.  The church is a well-equipped army on the march every Sunday, wreaking havoc behind enemy lines every day from the Secret Place of prayer, and standing to our posts laying siege to the battlements of hell in our city as God’s holy people go about living their lives of integrity.  We are overcomers!  Jesus is the Victor.

The Time Has Come to Pull Down Some Strongholds!