(Author’s Note: This is a devotion I wrote for our production company, Cathedral Arts Ministries, back in 1997.  It was written during and immediately after our Christmas production, The Promise of the Star. When we cleared the church platform to build our set, I was reminded of my first theatre experiences when I was in high school.  There is a theatre tradition of leaving a working light on when the theatre is empty.  In this tradition I continue to see the potential of the stage in the process of telling the Jesus Story.)

This is the old Jefferson Elementary building. It had been Helena High School when it was built back in 1916.  It had the only real theatre available to my high school so that’s where we did our Speech Class plays my senior year, 1966-67. 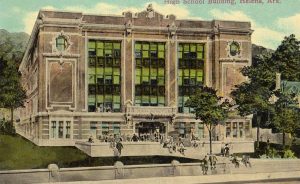 We had just closed our Spring Three-Act Play, The Curious Savage, and I was lingering in the old theatre, reluctant to leave.  The stage had been cleared and nothing was left except a single folding chair in the center of the stage.  All the lights were off except a single work light, a naked bulb hanging by its cord from somewhere in the loft.

I was stuck by the potential of an empty stage and an empty theatre.  I don’t remember how long I stayed, looking at it.  We had filled that stage with our play. I had trod those boards in two plays now discovering in the process that God had blessed me with a knack for this.  But now the stage was empty, ready for the next cast and crew, the next comedy or drama, the next company of creatives to move in and work the magic of theatre.  I was only 17 but I was awed by the promise held forth by the empty stage.  You can do anything with an empty stage.  You can move people to truth or error, to frivolity or profundity, to laughter or tears, to life or death, to far away lands or to your neighbor’s heartbeat.

This all came to mind a couple of weeks ago when we cleared way the choir riser blocks and were waiting for the scaffolding to arrive.  Our stage was empty.  I flashed back to that old theatre back home.  I have had so many stages since then, in Arkansas, Kansas, North Carolina, Missouri, and now in Florida.  I have tried to fill every one of them with the truth.

It is now Monday night and I’m waiting for the final crew to arrive to put the riser blocks back.  The stage, our stage is empty again, a lonely set of work lights patiently waiting for someone to come and get to work.  This past couple of weeks, we have filled it with truth, the truth of Christmas.  This Easter we fill it again with the rest of the story, the story of Jesus.

Pray for me as I seek the Lord for the music and script for The Promise of the Son.  I am confident that the Lord will lead me to just the right music and then lead me to write the script.  Through the whole process of producing The Promise of the Star I have enjoyed an abiding sense of God’s presence and leadership.  I know He will not abandon me now.  He knows my heart.  I just want to fill that empty stage with His truth so He can fill the house with His presence.

(Author’s note: Today, I pray that worship leaders will again see the potential of the empty stage in their assignment to tell the Jesus Story to their world.  The process of organizing the artists and technicians of the church into a production company is a holy one that must be renewed today.  Why not engage actors, designers, directors, stage managers, costume people, set builders, and writers as well as singers, instrumentalists, and technicians in the work of the ministry?)