The American Spirit
This essay is not about naming names for there are far too many. This is about a spirit, an American spirit, I observed at my 50th Central High School Reunion of the Class of 1967, Helena-West Helena, AR. We are the Baby Boomers, that pig-in-the-python group that caused new schools to be built at every level just to accommodate our numbers. Our Dads and Moms had fought and won World War II. They saved the world and thought they were going to run it forever. 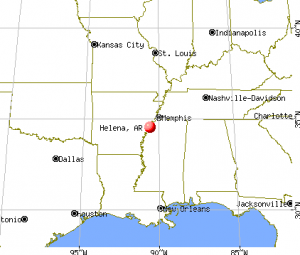 Our little twin towns were socially stratified; the lines and levels were clearly drawn and easy to see.

West was the only option, so old plantation lands were turned into an efficient little worker’s community. I am from West Helena. It was a great little town for growing up. We were all poor so we didn’t notice our poverty.

Geographically there is no space between the two towns, only a small creek running by the base of the hill adorned with the Helena Hospital where most of us were born in 1949. However, in so many other ways, a large chasm yawned between the towns, much wider than Caney Creek. 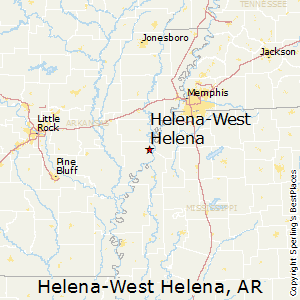 Helena took good care of West Helena.
For most of the 1st half of the 20th century, there were two complete all white school systems. (A single, separate but decidedly unequal school system served the black children of the two towns, but that is a different story.) 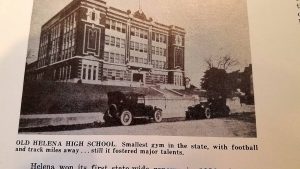 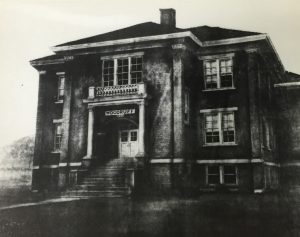 Helena leaders cut a railway for trolley cars through the hills to enable their workers to get to their jobs. Later this was replaced by the Twin City Bus Line; my father and my uncle both drove these buses. The drive between Plaza Street in West Helena and downtown Helena featured the kudzu-covered cliffs left from the construction of old trolley line. It was always fun to get to drive to Helena. 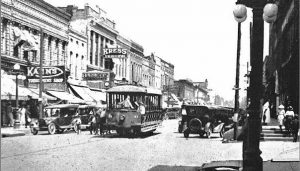 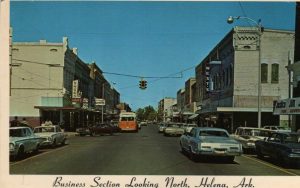 The social structure reflected by this history and geography began to breakdown in the late 1940’s when Central High School was built on the banks of Caney Creek. For the first time, both Helena kids and West Helena kids, came together to go to get the same education. Central Jr. High opened in the early 60’s completing the unification of the secondary schools from the 7th to the 12th grades. The Class of 1967 was the first class to make this 7th-12th grade journey at Central. The social structure of the two towns was mirrored in that of the school. 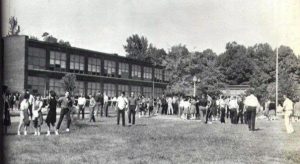 These kids were Baby Boomers.
Our veteran dads were a unifying factor. From the earliest days of school, we all knew what our dad’s did in the war, just like we knew what December 7th meant without ever being told. They fought a war to give us opportunity—the American dream—that no economic or artificial structure could suppress. Soon West Helena and Helena kids mixed in the safety of the classroom where intelligence and hard work enabled anyone to make his or her mark. In athletics, skill could make room for a player from anywhere to give the team a chance to win. In the arts, especially the CHS band program, talent made it possible for any good musician to rise to leadership. We did more than play the “Star-Spangled Banner” before football games, we were preparing to march under these colors!

This was the American Dream our fathers had risked their lives to win for us. At varying levels of consciousness, we knew we could make it with hard work, good study skills, and basic American citizenship.

I heard him loud and clear on both counts!

I am certain most of the people I went to school with, played football with, and played in the band with had similar conversations with their dads or moms.

50 Years Later
On Memorial Day weekend, 2017, many of the 165 1967 graduates of CHS met for a reunion. As we did, I gained the perspective I am trying to share in this essay: the old, artificial borders have been washed away like a 50 year flood on the Big River.

Our class produced outstanding people serving mankind in so many, many ways:

She couldn’t tell the difference!
Driving away from the reunion, I asked my wife if she could tell which of us were Helena kids and which of us were from West Helena. She could not. The differences which were so obvious when we were school kids were invisible to her as she watched us meet and greet after so many years.

Hats off to you, Mom and Dad, and to all the moms and dads of the class of 1967! We heard what you said and have tried to make the most of the freedom you won for us. Along the way, almost by accident, the remnants of the old European ideas of class somehow disappeared among us.

May America see another such flood of equality for some still have only the American dream and not the reality. 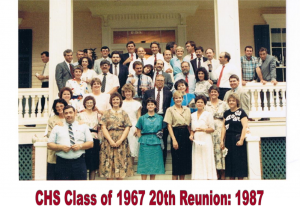 The American Dream and the Class of 1967