(Author’s Note:  My hobby is collecting classic films on DVD. I also review them on a Face Book page.  When I promote classic films, this is not an exercise in nostalgia; it is a recommendation of art that is well done and is a beneficial use of one’s time. I want to post this extended review on my ministry website because we are all having to deal with the media / entertainment complex. The enemies of the Cross seem absolutely dedicated to wiping out the influence of the One we worship, the Lord Jesus Christ.  Theatrical films reflect the times in which they were made.  This analysis of four films reveals the decline of the Lord’s impact on our nation. Those of us who know truth must not be swayed by the deceivers abroad in this country.) 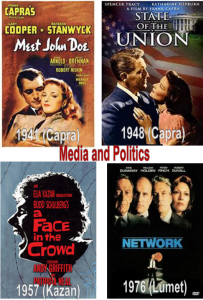 While each of these films deals directly with the relationship between the media and politics in the USA, they each come from contrasting eras of American life.

In this relatively short span of 35 years or so, American politics had profoundly changed.

These four films well represent these four eras of American movie making and political life.  They also chronicle the loss of a moral base of truth.  Let’s take them in chronological order.

Meet John Doe,  was directed by Frank Capra and mostly written by Robert Riskin, a frequent co-creator with Capra on his most honored and popular films.   Together they spoke to the “common man” with respect and reinforced the Judeo-Christian basis of the American soul.  Together with other directors such as John Ford, William Wyler, and George Stevens, they did much to prepare the generation that would fight and win WW2 for the work they would have to do and why it had to be done.  Released just months ahead of the attack on Pearl Harbor, this film was a rallying cry for the everyday American to overcome crooked politicians and see the dangers of fascism even as England was standing alone against Hitler and Japan was marching mercilessly through China.  References to Jesus and the Sermon on the Mount are frequent in what many consider to be Capra’s best film. While made by Capra’s own company, the resources and passions of Warner Bros pictures are evident everywhere.  While I cherish, It’s a Wonderful Life, reviewing “John Doe” in recent days may make this my favorite of Capra’s films.  The truth Mr. Smith was looking for in Washington is present here. It is expressed with Capra-esc cinematic eloquence  in the last line, “The people, yes, the people.” It can be rightly claimed that millions of “John Does” saved the world.  They resisted the deception of media run by evil men in smoke-filled rooms to fight with clear purpose around the world.  As for its relevance today, the whole story is about an item of fake news.

State of the Union probably marks the end of effective films by Capra.  Cynics had long called his view of America, “Capracorn,” and it seems in the 1950s he was unable to hold to his ideals and make commercially successful films.  This one came from a Broadway play and it shows but I like plays so that is not a problem for me.  It is fast-paced and full of snappy dialogue and physical humor like all Capra’s films and it is fun to see Tracy and Hepburn work.  Ironies abound as these two were having a well-known but hush-hush affair while he was married and would not divorce.  The story is about a man who is talked into running for president by a powerful newspaper woman with whom he is having an affair.  The deceptive presentation of him as a man of virtue as well as industry must include his wife and brings the two women together in a climatic live TV broadcast.  The smoke-filled rooms tangential to “John Doe” are the heart of this film.  The two warring parties seek to deceive the public with the media in full co-conspiratorial mode.  When the whole thing blows up on national TV, the leaders simply start looking for another stooge to present as having presidential timber.  True to Capra’s inherent optimism, honesty is reestablished although it requires a massive scene of repentance on the part of the Grant Matthews,  the protagonist, and what amounts to an onscreen re-affirmation of their wedding vows. The “Union” in the title refers to their marriage.  This is a fine film filled with the wonderful Capra touches made slightly more accessible by Capra’s well documented war experience as a persuader of this generation of warriors. (see Why We Fight for what amounts to a history of how WW2 got started.)

A Face in the Crowd with this film we move from the canon of a master filmmaker of the Golden Age to a collaboration between men, one from each coast, who were of the generation who saved the world.  Elia Kazan who came from the New York stage, directed this film.  Bud Schulberg who wrote it, though born in New York, was raised in Hollywood. His father was a studio executive.  This bi-coastal team decided to begin their expose of media influence in what we now call “flyover” country, oddly enough in my home state of Arkansas.  They found the perfect actor for the role of Lonesome Rhodes, Andy Griffith of North Carolina.  Having been raised in Arkansas and then spending nearly a decade in staff ministry in  North Carolina, I was already aware of the similarities in accents and culture.  This film is an indictment of media misused as implements of deception rather than tools of truth.  Profit motives abound and the audience is seen only as consumers who deserve what they get served.  There is no goodness in Lonesome Rhodes, a bum in sharp contrast to Tracy’s successful aircraft builder.  His vacant heart eventually does him in on live TV, betrayed by the woman who discovered him and has now been destroyed by him. Unlike the hesitant John Doe or the misled Grant Matthews, Lonesome Rhodes needs no prodding by others; his own ambitions and hedonistic lusts do him in.  The use of the media is his method.  He uses them as much as they use him. While this is a film of prophecy, profits are in the driver’s seat making this a precursor to Network, 19 years later.  The belief in the potential good of every man that made Capra’s films uplifting is completely gone, replaced by the contempt for the average person who lives between the coasts we see in the bicoastal news and entertainment coterie today. There is no trace of the Sermon on the Mount.

Network is often presented as a satire. I see it as an expose, an unblinking stare into the eyes of the deceivers who control the content of too much of what passes for entertainment and news today.  Master filmmaker Sidney Lumet joins forces with a favorite writer of mine.  I fell in love with Paddy Chayefsky’s work when I first watched The Americanization of Emily only to learn later of Marty and the other live TV dramas that came from his mind.  He had a method of writing extended catalogs (lists of items to make a point) for the actors that always ended with a surprise item. (* See example at the end of this essay) These catalogs abound in Network. One of the joys of this film is watching these actors enjoy the speeches Chayefsky gives them.  These pros are having fun at their craft while delivering devastating speeches.  There is no scenery left unchewed in this film.  I must warn my readers about the language in this film; it is obscene and profane.  (See my article, “Options” wherein I deal with the sins of the nation, one of which is the abuse of language. Seek the link below.) All the artistic restraints on language are missing in this film.  Chayefsky first found success writing for live TV dramas and therefore found ways to say what needed to be said without profanity or obscenity.  In this film his characters rattle away using splendid, effective language like in the old days and then, as if the writer suddenly remembers it was the 70s and his characters suddenly let loose a string of language I despise—so be warned.  Although this film is seen as prophecy, the real warning of the piece is of the unbridled search for profit.  There is no right or wrong and the Sermon on the Mount is completely forgotten.  A powerful industrialist seeks to engage the protagonist, a news anchor gone raving mad, to be the prophet of a new gospel.  He even uses Christian language calling his message an “evangel.”  But it is all method and no meat for the soul.  This speech by Ned Beatty is a moment that must be seen.  The network executive played by Faye Dunaway is the empty shell of a woman who seduces William Holden’s character to leave his wife.  Broken vows are a staple of stories like this, standing in for the vows of trust broken by those who are supposed to be dedicated to the truth but have sold their souls to profit.  Holden’s speech to Dunaway when he realizes who she is encapsulates the whole idea of the film.

“You’re television incarnate, Diana, indifferent to suffering, insensitive to joy.  All of life  is reduced to the common level of banality. War, murder, death, are the same to you as bottles of beer and the daily business of life is a corrupt comedy. You even shatter the sensations of time and space into split seconds, instant replays. You are madness, Diana, virulent madness. Everything you touch dies with you, but not me, not as long as I can feel pleasure and pain and love.  And it’s a happy ending: wayward husband comes to his senses, returns to his wife with whom he’s established a long and sustaining love— heartless young woman left alone in her arctic desolation. Music up with a swell. Final commercial. Here are a few scenes from next week’s show…”

“Arctic desolation.” Wow! I have to love this kind of writing.  The relevance of this film from the 70s to today’s media circus is readily apparent.

What do we learn from these four films?

We learn that if there is no truth at the center or our lives, we can only drift about “tossed about by every wind of doctrine” just as the Bible warns. No prophet has surpassed John the Baptist in his warnings that we must repent.  No Savior has taught a lesson greater than the Sermon on the Mount.  Once the value of the individual was the basis of life in America. It was at the heart of our Revolution against tyranny and the terrible struggle to liberate the slaves and it was the missing factor in our attempts to bring democracy to Islamic lands which do not have the words of Jesus.  The media’s hatred for Jesus is robbing America of this solid rock.  Without it, the storms beat upon us without mercy and the sand beneath us is giving way.

For more on the sins of America, go to:https://stevephifer.com/choices/ 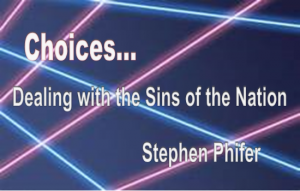