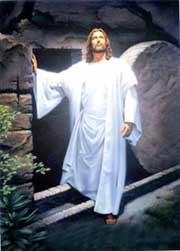 It was going to be a long night.
A squad of sixteen strong soldiers stood watch through the night, four at the time. Soldier jokes quickly wore thin and soon no attempts at humor could lighten the mood. From the lone officer to the youngest recruit to the most ignorant and crass veteran, the soldiers resented this duty. Sleeping out under a full moon held no romance for them. Armor does not make the ground softer. Night air does not ease the persistent cough or loosen the joints grown stiff in the humid dark.

More disgusting than the discomfort was the duty itself: guarding a dead man. The soldiers had spoken to the execution squad and were sure their comrades had done a good job. The corpse was not going anywhere. It had taken all sixteen of them to roll the huge stone into place. The lever and fulcrum they had used protruded from the bushes near the tomb but that was no risk for these weak-kneed Jews. There was no danger in this garden, just as there was no comfort to be found either.

Along toward Morning…
With twelve soldiers sleeping, or trying to, while three watched the approaches to the tomb and the other paced back and forth in front of the stone, a sudden shaking of the earth brought them all to an immediate full alert. They could not know that this earthquake was highly localized and no one else would even report it. It seemed the whole earth was shaking as dust flew up from the floor of the garden to cloud the air. Their training took over and immediately they formed a cordon of defense, ready to repel an attack from any direction.

Something like lightning, but much more startling, much brighter, struck out in all directions from inside the tomb and with a thunder that rattled the brains of each soldier. A brilliant beam of this magnified light circled the huge stone from inside the opening of the tomb sending out shards of light into the darkness. The dust from the earthquake reflected the circling light giving weird and beautiful shapes to the shining beams.

Blinded by the light and bewildered by shaking of the earth the soldiers drew their swords and positioned their shields. One of them found the lever since his short sword was temporarily mislaid.

Suddenly, they were not alone.
Without the soldiers seeing where he came from, a tall warrior suddenly confronted them. He carried no weapon and it looked like he would never need one. With a single look, the angel silenced and shackled the soldiers of the Empire with a fear they had never known. Instead of reaching for them, the angel went for the stone.

With unimaginable ease the angel rolled the stone from the door of the Tomb with a single hand and then sat on it. The light and smoke from inside the tomb poured out into the garden like the bursting of a dam. The soldiers, all sixteen of them, collapsed to the ground and fell into a trance as if they were dead. They did not see what happened next.

Emerging from the blinding light, Jesus stepped out of the tomb.
The soldier angel stood in His presence. This was the One he had worshiped and adored as long as he could remember and angels can remember the very beginning. From every corner of the garden and from every corner, it seemed, of heaven itself, came the choirs of heaven singing a new verse to the song the shepherds had heard so many years before. For centuries to come those of earth would gather on the first day of every week to sing the song.

On this morning of the third day, in the isolation of this garden of death it was for heavenly creatures only to sing the song of victory. The angels remember like it was yesterday the other Garden, the Garden of Life where the reign of death had its beginning. Now the wrong was righted. The joy restored in triumph. Jesus, the Second Adam, was the Victor! The sharp sting of death was blunted. The bondage of the grave was broken. He had won for all of those who would believe in Him complete victory over sin, over sickness, over wrath, over judgment, and over even the loneliness of selfishness.

We gather on the first day of the week because the ancient song must be sung at the beginning of everything new: “He is risen! He is risen, indeed!”

Scriptures:
Matthew 28:2-4; Mark 16:9-10; Luke 24:4-6
There was a violent earthquake, for an angel of the Lord came down from heaven and, going to the tomb, rolled back the stone and sat on it. His appearance was like lightning, and his clothes were white as snow. The guards were so afraid of him that they shook and became like dead men. When Jesus rose early on the first day of the week, he appeared first to Mary Magdalene, out of whom he had driven seven demons. She went and told those who had been with him and who were mourning and weeping. While they were wondering about this, suddenly two men in clothes that gleamed like lightning stood beside them. In their fright the women bowed down with their faces to the ground, but the men said to them, “Why do you look for the living among the dead? He is not here; he has risen!
1 Corinthians 15: 20-23;54-57
But Christ has indeed been raised from the dead, the firstfruits of those who have fallen asleep. For since death came through a man, the resurrection of the dead comes also through a man. For as in Adam all die, so in Christ all will be made alive. “Death has been swallowed up in victory.” “Where, O death, is your victory? Where, O death, is your sting?” The sting of death is sin, and the power of sin is the law. But thanks be to God! He gives us the victory through our Lord Jesus Christ.
Revelation 5:9-14
“You are worthy to take the scroll and to open its seals, because you were slain, and with your blood you purchased men for God from every tribe and language and people and nation. You have made them to be a kingdom and priests to serve our God, and they will reign on the earth.” Then I looked and heard the voice of many angels, numbering thousands upon thousands, and ten thousand times ten thousand. They encircled the throne and the living creatures and the elders. In a loud voice they sang: “Worthy is the Lamb, who was slain, to receive power and wealth and wisdom and strength and honor and glory and praise!” Then I heard every creature in heaven and on earth and under the earth and on the sea, and all that is in them, singing: “To him who sits on the throne and to the Lamb be praise and honor and glory and power, for ever and ever!” The four living creatures said, “Amen,” and the elders fell down and worshiped.

Prayer of Praise:
Glory to God
From the Book of Common Prayer
Glory to God in the highest, and peace to His people on earth. Lord God, heavenly King, almighty God and Father, we worship You, we give You thanks, we praise You for Your glory. Lord Jesus Christ, only Son of the Father, Lord God, Lamb of God, You take away the sin of the world: have mercy on us; You are seated at the right hand of the Father: receive our prayer. For You alone are the Holy One, You alone are the Lord, You alone are the Most High, Jesus Christ, with the Holy Spirit, in the glory of God the Father. Amen. Glory to the Father, and to the Son, and to the Holy Spirit: As it was in the beginning, is now, and will be forever. Amen.

4. Soar we now where Christ has led, Alleluia!
Following our exalted Head, Alleluia!
Made like him, like him we rise, Alleluia!
Ours the cross, the grave, the skies, Alleluia!