Calling All Pastors and Worship Leaders!

We have a story to tell!

We’ve a story to tell to the nations, that shall turn their hearts to the right,
a story of truth and mercy, a story of peace and light.

For the darkness shall turn to dawning, and the dawning to noonday bright,
and Christ’s great kingdom shall come on earth, the kingdom of love and light.

Well it is still true.  Every church needs a troupe of storytellers.  These God-commissioned craftsmen need scripts of all kinds:

Jesus was a storyteller and so must we be!  Storytellers need scripts.  I have been creating scripts for these story-telling events for more than 40 years and I want to help you be a part of the coming Renaissance of the worship arts.  Beauty is going to return to the House of God as his anointed actors and skilled technicians find their places of ministry to do these three things:

They will need material, professionally crafted scripts, to help them do these things. 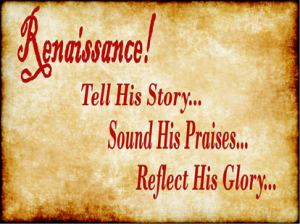 Your church should be the most creative place in town!

Give me a call or send me an email and let’s get the ball rolling!  Assemble your cadre of storytellers…

We’ve a story to tell! 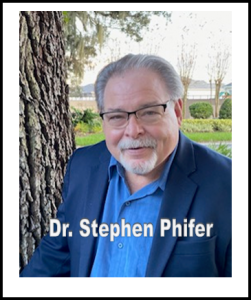 **The first of my Jesus-Story cycles with two plays taking place 30 years apart.  This became my preferred form since it was more pastoral and more manageable for the company..  Year 1 we learned the plays. Year 2 we improved them. Year 3 we enjoyed them. The next year we created a new cycle of plays. 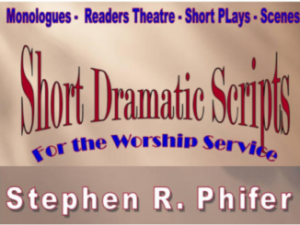 “Dr. Phifer’s scripts adhere to high standards. His characters are rich and believable, his dialogue imaginative. His story is consistent and true for it is ultimately focused on Jesus.” Larry Hartley, Actor/Director of Community and Christian Theatre

I served alongside of Dr. Phifer in a large congregation from 1987-1993 and observed the impact of his writing, staged productions and musical accompaniments.  His gift made a huge spiritual impact on our city and specifically among artists within the community.    The arts community within the church itself were perhaps the most well discipled, given the biblical orientation of Dr. Phifer’s scripts which provided the congregation opportunity to actually live into the scriptures by way of dramatic engagement.  Again, a servant most gifted! John Bost, Master Counsel & Associates, Inc. Winston-Salem, NC

Dr. Steve Phifer amazingly combines his creative gifts of writing scripts and music, with performance gifts of acting, singing, and playing instruments to produce unique stories of the reality of Christ.  I was honored to work under his leadership in Carolina Christian Arts as the Director of Visual Arts, doing seasonal fine art exhibitions, graphic art for church communications, and sets for musical dramas intended to draw the audience into the action.  Through Dr. Phifer’s direction, the scriptural functioning of the body of Christ was realized in all of its many parts producing a whole that was unachievable without each part doing its work. The participation of musicians, actors, singers, and artists in these productions bonded the church, and ministered the truth of Jesus to the community and non-believers who attended.  Dr. Phifer’s life and work are consistently Christ-focused, bringing the Kingdom of God to life through the arts, and restoring the arts to their rightful purpose of reflecting the Creator’s glory while giving Him the glory due His name.  I cannot more highly recommend this man of God to anyone intended on promoting the Kingdom of God through the arts. Deane Groseclose, Cross-Purpose Ministries, Clemmons, NC

Pastor Steve has the unique ability to paint the entire picture of what a church production should be. From writing engaging scripts filled with inspiring messages, conflict, and hopeful endings, to piecing it together with music, action, and fascinating sets, Steve sets the bar for what church dramatic productions should be. His scripts come alive, and he utilizes his skills as a professional musician to bring in the right musical elements to make a play complete. I look forward to his new venture as it will help many churches stage productions that have been sorely missing in faith-based drama: really good theater that people will want to be a part of, and see. Bruce Inverso, veteran church theater director and actor, St. Petersburg, FL

Thank you Jesus! and…Pastor Steve Phifer, for making my life so much richer! I will ALWAYS remember each “Behold Him!” Patti Briggs, Chorus Member, Winston-Salem, NC
Whether a short dramatic piece or a full- length script for musical theater, Steve Phifer’s scripts tell the story of Jesus in a way that grips the heart and captures the attention of all ages and walks of life. Through rich character development, captivating dialogue, and strong adherence to truth, the beloved stories of scripture come alive.  Many of my favorite church “moments” come from getting to “tell the story” through the writing of Steve Phifer. Gail Moulds, Atty at Law, Director/Actor Cathedral Arts Ministry, St. Petersburg, FL

Dr. Steve Phifer is a gifted author and scriptwriter.  I had the privilege of being a cast member in some of his musical theater productions during the years we both worked at Suncoast Cathedral in St. Petersburg, FL.  The professionalism and skill of these productions started long before the performances…Dr. Phifer spends many days crafting a script to masterfully tell the “Jesus Story”, as he likes to say….And he tells that story in so many compelling and memorable ways.  I highly recommend Dr. Phifer as a resource for scripts, and as a consultant in drama ministry. Darlene Greenlee/Producer-Host at The Christian Television Network

The difference in all of Steve Phifer’s works is “the anointing” of whatever the presentation may be. His research, his prayers and his knowledge of the arts make him effective in reaching any audience. May God continue to bless any endeavor this man of God undertakes.
Martha Boles, Scenic Painter, Carolina Christian Arts, Winston-Salem, NC

Dr. Steve Phifer — a gifted follower of our Lord Jesus Christ and worship leader, musician, conductor, playwright, and professional actor, he is the resource for every choir director, drama director, or worship artist! If you need a quality product for your church presentation of the life of our Lord Jesus Christ, he has the background, Bible knowledge, and spirit to guide your product from cradle to grace. As a fellow artist, I have sung his songs, acted his scripts, and joined teams of great people doing God’s work. As part of the team for his celebratory products at Word of Life Church in Springfield, Virginia, I saw his creative hand in the formation of “Bethlehem’s Star” and “Calvary’s Crown.” This amazing and connected portrayal of the life of our Lord Jesus connected characters across the span of time, and this kind of genius is so typical for Dr. Phifer!   Dr. Steve has what it takes to weave a tale and leave you wanting more. And the “more” oftentimes rests in the hope of Jesus Christ! Trust Steve to bring you from concept to conclusion.
Orlando “OJ” Dona Lt Col, USAF (Retired) Musician (String Bass), actor and singer, Follower of our Lord Jesus

Here are some helpful, vision-building articles:

PRODUCTION MINISTRY To Be or not To Be? PART ONE (of 5 parts)

No One Has Hired Us: The Role of the Artist in the Mission

The Spirit-Led Artist Part One (7 parts)