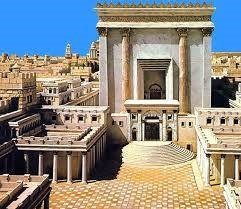 No one knows where Jesus found that whip, the one He used on the money-changers that day, but He knew how to use it.

It was the third Temple to stand In Jerusalem.
The first Temple, built by King Solomon on the plans of His father, David, stood for many years before apostasy and the Babylonians brought it down. The second was built by Zerubbabel, a “Prince of Judah,” born in Babylon but also born in King David’s line. It stood until the reign of King Herod who began construction on a Temple of a size and beauty to rival Solomon’s structure. This political gesture was still under construction the day Jesus found that whip.

The gentle Jesus had fire in His eyes.
His strong, carpenter’s hands were sure of grip and his powerful arms smooth in motion. He did not miss. Doves flew from broken cages. Coins scattered noisily on the stone pavement. Merchants scrambled down dangerous Temple steps facing injury if they fell forward and the lash if they stood still.

It wasn’t as if no one had seen Jesus angry before.

Sometimes His anger was so great that it brought tears.
On this day, as He approached the city, He had broken down in tears over their disregard of the visitation from God that was happening in front of them. He had wept before because the people were leaderless, like “sheep without a shepherd.”

Perhaps His eyes still stung with tears even as he overturned the tables, scattered the scavengers, and proclaimed their sin for all to hear!

“Is it not written: ‘My house will be called a house of prayer for all nations’?
But you have made it ‘a den of thieves.”

A Different Order
Their corrupt political machine grinding to a halt before them, the religious leaders scrambled to restore order. Before they could do that, Jesus started healing sick people. The same strong hand that served out justice without mercy, now delivered mercy and justice. There was nothing the establishment could do to stop Him.

Some of the people listened. Some of them felt His touch. They came to the temple that day with barely enough to buy a dove for a sin sacrifice and they went home healed. How can this be? How can one group of people have welts to dress from the whip and others have new life to relish from the same hand?

The only answer is grace—the one thing a Temple must possess.

When the healing was done, Jesus returned to rest in Bethany. The next day brought another debate with the leaders and another loss for them. Jesus was just as sure a marksman with the comment or story as He was with the whip. They were sorely outmatched.

Prayer:
Lord Jesus, to you we shout “Hosanna!” which means “save us now!” We must honor Your procession into this house of worship. We shout Your praises and sing of Your might. We will not let rocks and stones out-sing us! We will carpet the ground before with our hearts. We will wave our hands like living branches to welcome You into our House, into our spirits. Hosanna! In the Highest! Save us now, O Lord! We need You and Your astounding peace. May Your Kingdom come and Your Will be done in us this day! Hallelujah! Amen!