Psalm 16:11 NKJV
You will show me the path of life; In Your presence is fullness of joy;
At Your right hand are pleasures forevermore. 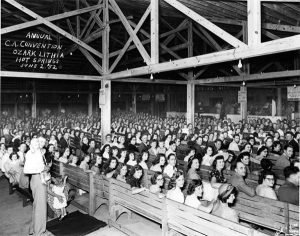 In those days so long ago the youth of my church, the Assemblies of God, gathered from all over Arkansas to our state campground in Hot Springs for our annual CA Convention.  “CA” stood for “Christ’s Ambassador,” the national name given the youth of our fellowship.  The public school teachers in Arkansas had their annual meeting on Monday -Wednesday of Thanksgiving week so schools were out all over the state.  Thus, we teens who were called to represent the Lord to a world in such desperate need of Him, could gather for a convention of our own and we did, boy, did we!

The campground featured an open-air tabernacle where hundreds of us gathered at least twice each year—in the summers at 5-day long youth camps where we sweated in the oppressive Arkansas heat and in late November when we shivered in the corresponding Ozark mountain cold.  One year the temperature reached 22 degrees! The services were rich with the presence of the Lord and ripe with spiritual challenges.  There was also a musical competition called Teen Talent and in later years the CA Convention featured a youth choir contest.  It was an opportunity for us young people who were developing our skills for the lifetime of ministry beckoning to each of us.

The final service was always a celebration of The Lord’s Supper on Wednesday morning. It was a powerful way to come together before we all said goodbye until the next summer. I had won the instrumental part of Teen Talent with my clarinet, probably playing “Just a Closer Walk with Thee,” and I was sitting with my accompanist for that juvenal triumph.  It was all so predictably sweet but then something entirely unpredictable occurred.

Holding the communion elements in my hand, I was suddenly totally enveloped in the presence of the Lord.  Two summers before, when I was only 14 years old, I had received my baptism in the Spirit in that very room which was an experience in God’s presence that changed my life forever.  I remember walking all around that open-air tabernacle praying in the Spirit.  Following my older brother’s lead, I began to seek the will of God for my life.  In between that summer immersion into the Spirit of God and this late fall meeting, there had been another gathering of the CAs of Arkansas in Little Rock for 3 days of door-to-door witnessing and evening services.  At that meeting I was made aware that there was an office of local church leadership called, “The Minister of Music.”  I had never heard of such a thing, but it was good news.  I realized that God was calling me to a life of making music for His glory.  There were now two options. I could be a school band director, or I could be a minister of music—or maybe—I could be both.  Based on this calling I had reorganized my life around getting ready to go to college and study music.  I quit the football team and told my band director that I was going to college to major in music. I was his to command. That November convention marked the first semester of my senior year of high school.  I was on my way!

Wait a minute—God had a different twist on my life and during this communion service He made it unmistakably clear.

Back to that service—I was completely enveloped in the presence of the Lord.  While others were contemplating the cup and the bread in their hands, I was experiencing a visitation from God like I had never before known.  I could not pray in English, nor could I pray in the Spirit.  All I could do was sob, huge body-shaking sobs requiring a complete dismissal of any high school senior, teen talent champion, ex-football player decorum.  In this state of spiritual suspended animation, brightly colored letters like neon signs lit up in front of me, one at the time, spelling out this one-word command:

This specific, unmistakable, explicit command, focused this immersion into the Spirit of God.  There was no misunderstanding this call.   No ambiguity at all. God was calling me to preach.

Soon the presence lifted, and I was able to rejoin the worship service everyone else was having.  My accompanist sitting next to me asked, “Steve, what has happened to you?”  The first words of my post-calling-life were these, “God has called me to preach.”  My friend was surprised and expressed the life-long challenge of my ministry.  “O no!  You’re supposed to me a minister of music!”

Culture vs. Calling—“The Forces of Destiny”

In those days in Arkansas, if you felt the call to preach, you did not have to ask God what was next. It was expected that you would go to Southwestern Assemblies of God College in Waxahachie, Texas. My brother was already there.  Also in those days, the call to music ministry and the call to preach were two decidedly different callings, just as the “song services” and “special music” were different from the preaching.  So, I gave up music to pursue preaching.  What else could I do?

However, at that same campground the summer before Thanksgiving of 1966, I had received teaching at youth camp on how to find and follow God’s will for one’s life.  One of the signs to help us on this journey was the peace of God that Jesus promised to those who followed Him.  When you were in God’s will, there was a “deep, settled peace,” as the old song reported.  When you were out of God’s will, there was a deep, disturbing misery.  When I returned to school after Thanksgiving to experience my final semester of band-life, I found myself in complete misery.  My dreams had been tossed out of some theological window I hadn’t known was open.

Our band met first period every morning.  We were really good and we were headed for another “First Division” rating at the State Convention, also in Hot Springs, later that year.  We played lots of transcriptions in our band—orchestra pieces arrange for concert band. One of these was Giuseppe Verdi’s beautiful, La Forza Destino.   In transcriptions the clarinets are given the violin parts and they are quite demanding. One Friday morning we had trouble with a technical passage scored for the whole clarinet section, parts 1, 2, and 3 in unison.  Mr. Balch announced a tryout for Monday morning on that passage.  I was not a disciplined clarinet player at this point in my life. I played better by ear than by notes and I was usually too lazy to practice.  Not this time.  In the musical jargon of the day, I took that passage “to the woodshed.”  On Monday morning I was in my well-deserved place—5th chair 2nd clarinet.  One by one we started attempting to play the passage.  The four 1st clarinets made their attempts and then the 2nd clarinets started their efforts.  So 8 players played before I played, each getting shakier as the competition grew closer to me.  My time came and I nailed it.  Every head in the section turned to look at me. Mr. Balch said, “Well, Phifer, what got into you?”  He moved me from 5th chair 2nd to 2nd chair 1st, between two of the best-looking girls in the band! (This was always one of the joys of being a boy in the clarinet section!)—The Force of Destiny! (La Forza Destino)

A week or so later another unprecedented thing happened.  A college band director visited our band room, Mr. Gayle Campbell from Arkansas A&M College in Monticello.  He listened to our first period rehearsal and was appropriately impressed. At the end of the period Mr. Balch called me into his office, “Steve, Mr. Campbell wants to talk to you.”  He offered me a full tuition scholarship to come to A&M College to major in music.  I was stunned.  I had given up music so what was this all about?  I protested, “Don’t you want to hear me play?”  I knew I was not a good sight-reader.  He answered without hesitation, “If you are sitting 2nd chair in that band, that is good enough for me!”  The Force of Destiny! 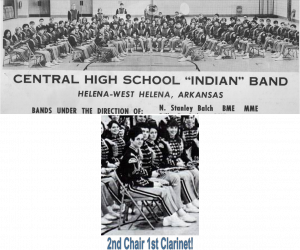 A few weeks later I visited the campus and the misery lifted from my life.  The peace of God flowed fully into the hole where the misery had multiplied.  Somehow, there were two calls of God on my life, music and preaching!

Then, the next Spring, I was president of our Chi Alpha (the college-Greek version of CAs) and the local pastor heard me speak. After the service, Pastor Crick asked me, “Steve, is there a call on your life to preach?”  I told him this strange story and he encouraged me to apply for ministerial papers with the Arkansas District.  In June of 1968, I was granted the first level of ministerial recognition, The Exhorter’s Permit.  Before I graduated with the bachelor’s degree in music education in June of 1971, I became a fully licensed Assemblies of God preacher in June of 1970.

How has it worked out?

The Lord knew back in 1966 what His church would need in the 1980s and beyond—leaders who were persons skilled in the Word and in the Worship Arts and this was His 2-part call on my life.

On this Thanksgiving Day, I am grateful to the Lord for the music we have made and the music still to come. I am thankful for the depths of Scriptural understanding I have found as a pastoral artist in the House of the Lord.  The Force of Destiny!

Psalm 16:11 NKJV
You will show me the path of life; In Your presence is fullness of joy;
At Your right hand are pleasures forevermore.

Here’s a link to a professional recording of this piece: https://tinyurl.com/359jfc52