What is the Role of the Family in Public Worship?

One generation shall praise Your works to another and shall declare Your mighty acts.

Author’s note:  Every worship leader has two stories to tell.   The first is the Jesus Story.  The songs we provide our congregations should tell the story and celebrate the truth about Jesus—The Gospel of Christ. The second is the worship leader’s testimony.  Really this is another chapter in the Jesus Story.  Since public worship is primarily about Jesus and not about us, the second story is best told as subtext. Congregations quickly tire of “worship” that has more to do with the worship leader than with the Lord. While telling the Jesus story with songs and scriptures, the heart of the worship leader is revealed, that is, his/her knowledge of scripture, personal experience with God, and ongoing sensitivity to the Holy Spirit.  The worship service must be about Jesus, but in the conduct of our worship leading ministry, our own hearts are revealed.  This essay is my attempt to pull back the curtain on my story.  I pray this is not ego.  My goal is to present the perspective of one who came from a worshiping, musical family and who has been in church leadership for several decades.

A Boy and His Music

Before I had any music of my own, I had my father’s music.
What’s more, before he had his own music, he made the music his father needed.  My grandfather, Rev. John Phifer, was a first-generation Pentecostal preacher and my father, J.D. Phifer, played guitar and piano for him. I came along as a third-generation addition to this inter-generational transfer of music and faith.

My Father’s Story
My father’s music was multi-faceted:  There was

As his child, I welcomed all three manifestations of my father’s music.

Walking down Havana street, there I saw a girl so sweet.
I stopped to ask her name. She said, “It’s Linda Lane.”
Linda (Linda) I love (I love) you so. (you so.)
My heart keeps singing, “Linda, my love.”

My father’s music was the music of his life.
Service in WWII led him to stray away from the faith handed to him by his father.  He came home from war a drinker, smoker, and a gambler.  Country music was his dream.  To his surprise, he discovered that the beautiful girl he had married, Ruth Jackson Phifer, was a terrific singer.  Bingo!  He knew she could put his original songs across.  There was a problem.  She didn’t want to!  What she wanted was a family with a father for her kids, something she knew little about growing up.

Helena, Arkansas.
On the western bank of the Mississippi river, my hometown was a musical wonderland.  The seeds of so many styles thrived in the fertile Delta soil. Dad played music with the astounding group of post-war musicians in Helena in those days, like John Robert Huie and Harold Jenkins, (later to become Conway Twitty). He was hoping to make it big in country music but he couldn’t talk Mom into singing for a show.  Another local celebrity, Bob Evans, host of the Miss Arkansas Pageant and famed professional singer, worked with Dad.  We used to have an arrangement in Bob’s hand of Dad’s song, You’ve Got that Certain Little Something about You scored for voice, piano, bass, and clarinet.  It must have cost Dad plenty!  Somewhere along the way, someone introduced Dad to proper song-writing form.  His songs are compact, perfectly formed, shining jewels.  I have always thought Bob Evans might have been his teacher.

One night in the early 1950’s, Mom, Dad, and Harold Jenkins took the ferry across the Mississippi River over to Clarksdale and recorded two sides of one of Dad’s songs, It’s My Turn to Cry Over You.  Mom sang it on one side and Harold sang it on the other.  Years later, the family agreed Mom did it better. The 78rpm disc has long been lost but I played it many times.

The Turning Point
On Mothers’ Day 1954, Mom gave her heart to Jesus.  This was the last thing Dad wanted!  He put her through hell trying to turn her around.  Soon, a lady of the church, Bonnie Travis, led Mom to her Spirit Baptism and there was no turning back.  My older brother, James, had many memories of Dad the drunk but I have only a few.  This one stands out: early on a Sunday morning, Mom was getting us ready for Sunday School when Dad came home drunk and cursing.  The words he used and his rage against Mom and toward God scarred me deeply.  Still, she got us to church anyway.

Dad couldn’t run from God forever.  A little while later, on a Sunday night, Dad came to the altar and returned to his heavenly Father.  I know his father, gathered with the angels above, sang a song of rejoicing as his son started his life all over again. Years later, the pastor told my brother and me about that night.  He said two little boys in jeans knelt just behind Dad watching as their father wept his way through to the Lord.  They were my brother and me.

My Father’s music changed that night.  His original songs became the chronicle of a new life:

As he had done for his father, he started playing piano for worship at the West Helena church. Soon, the old upright piano at home and Dad’s well-worn Kay guitar performed the spiritual themes for our home.  Mother has delighted to join him to sing gospel songs.  They became a duet in demand at youth rallies and revivals.  My first memory of the presence of the Lord happened as Mother led our little Sunday School class singing, Oh, How I Love Jesus.  I will never forget the sound of her sweet alto, the sweetness of the song itself, and the picture on the wall behind her of Jesus holding the lamb over His shoulders. It all came together for me as we sang.  I knew I was that little Lamb and that Jesus was my Shepherd.  I knew I loved Him and as we sang, I sensed His presence, deeper than emotion and more profound than thought.  He loved me and was there with me—in me.

The soundtrack of my childhood was my father’s music and that of his generation.  That was the 1950s.   No one could see the musical revolution that would come in my teens, the 1960s. 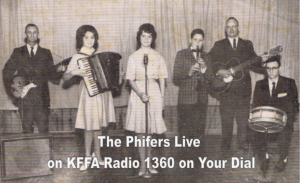 My Fathers' Music Part One