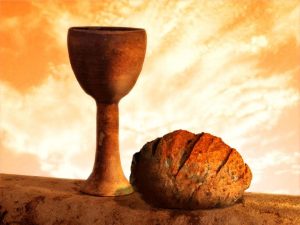 Unable to speak, walls are mute witnesses to what happens within them.
They merely hold up the ceiling, hold out the weather, and hold on to their secrets.

It was a large room, borrowed, of course, for the occasion of the last supper Jesus and his disciples would have together. Thirteen men, and perhaps the necessary servants for such a large gathering, filled the room, not at all sure of what to expect.

Never Quite Sure…
Those who followed Him were never quite sure what He was doing at the moment or what He might do next. In the last few weeks a sense of sorrow emanated from Him. He told them strange things about being killed and rising again but they had no room in their hearts for such talk. He was the proven master of all things: storms, sickness, demons, and death itself. He never exhibited one bit of fear of the religious leaders or the Roman leaders or even their terrible army. Who would kill Him? It was not easy to ignore the questions such remarks left in their plans.

Chosen
Just as He had called each of them to follow Him, Jesus had called them here to this meal. On this occasion He chose to reveal details of what was to come for them.

There was no way those sitting together in this large chamber with its smoke-stained walls standing silent watch could grasp the meaning of His words but they did not forget. Each Gospel writer is faithful to record the details for us.

The Lord’s Supper
So for centuries, believers have received the cup and the bread in honor of Jesus’ sacrifice. We have debated its meaning, its nature, its appropriateness for any or all of us. But we have obeyed His command to do this “in remembrance of me.” Though the ongoing discussion divides us, the meal itself unites us across all the lines we draw and the borders we guard.

Why? Because their Last Supper became our Lord’s Supper. As we enter into the past, our present is blessed with His presence.

Scriptures:
Matt 26:20
When evening came, Jesus was reclining at the table with the Twelve
Mark 14:16-17
The disciples left, went into the city and found things just as Jesus had told them. So they prepared the Passover. When evening came, Jesus arrived with the Twelve
Luke 22:13-14
They left and found things just as Jesus had told them. So they prepared the Passover. When the hour came, Jesus and his apostles reclined at the table.
John 13:1-5
It was just before the Passover Feast. Jesus knew that the time had come for him to leave this world and go to the Father. Having loved his own who were in the world, he now showed them the full extent of his love. The evening meal was being served, and the devil had already prompted Judas Iscariot, son of Simon, to betray Jesus. Jesus knew that the Father had put all things under his power, and that he had come from God and was returning to God; so he got up from the meal, took off his outer clothing, and wrapped a towel around his waist. After that, he poured water into a basin and began to wash his disciples’ feet, drying them with the towel that was wrapped around him.
1 Corinthians 11:23-26
The Lord Jesus, on the night he was betrayed, took bread, and when he had given thanks, he broke it and said, “This is my body, which is for you; do this in remembrance of me.” In the same way, after supper he took the cup, saying, “This cup is the new covenant in my blood; do this, whenever you drink it, in remembrance of me.” For whenever you eat this bread and drink this cup, you proclaim the Lord’s death until he comes.

Prayer:
(from the Book of Common Prayer Adapted SRP)
(Lord Jesus, we) proclaim the mystery of faith: Christ has died. Christ is risen. Christ will come again. We celebrate the memorial of our redemption, O Father, in this sacrifice of praise and thanksgiving. Recalling Jesus’ death, resurrection, and ascension, we offer you these gifts. Sanctify them by your Holy Spirit to be for your people … the holy food and drink of new and unending life in him. Sanctify us also that we may faithfully receive this holy Sacrament, and serve you in unity, constancy, and peace; and at the last day bring us with all your saints into the joy of your eternal kingdom. All this we ask through your Son Jesus Christ: By him, and with him, and in him, in the unity of the Holy Spirit all honor and glory is yours, Almighty Father, now and for ever. Amen.

Refrain:
When I fall on my knees,
with my face to the Lord of life (rising sun),
O Lord, have mercy on me