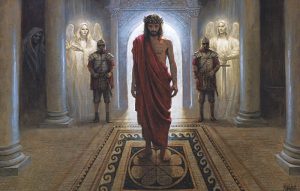 Irony of ironies:
Jesus the Good, Jesus the Righteous, Jesus the Just—standing in the judgment halls of bad men, sinful men, and unjust systems both political and religious.

Has the world ever seen such restraint on the part of any defendant? Not only was He innocent of the charges made against Him, He commanded an unseen corps of warrior angels, ten thousand in number, ready to spring to His rescue with the slightest signal from their Master. But they were not given the order to rescue, to defend, or even to secure Jesus from further injustice. I am sure angel-heads shook in dismay. What was the Father’s plan? Why was such a thing happening before their eyes? If angels have ever breathed hard, it must have been then; angel-muscles rippling with angel-weapons tightly gripped and at the ready.

There was to be no rescue.
Jesus was taken before the religious authorities, Annas and his son-in-law, Caiaphas, the High Priest. The whole governing council of the Jews gathered for an illegal middle-of-the-night trial. Their witnesses could not get their stories straight as Jesus stood before them as silent as a lamb before the sacrificial knife. Finally He was asked to testify against Himself which he readily did:

“Yes, it is as you say,” Jesus replied. “But I say to all of you:
In the future you will see the Son of Man sitting at the right hand of the Mighty One
and coming on the clouds of heaven.”

There followed sudden cries of official outrage and the requisite moans grief that could barely mask their inner delight at His words. Tearing their robes in dramatic demonstration of their political advantage, they declared Him death-worthy, slapped Him around, taunted Him and sent Him to Pilate.

Before Pilate
The Roman governor had several official duties he would rather start his day with than another Jewish rabble-rouser, but he had little choice but to go along with these fanatics in their bloody, arrogant (one God!) religion. His job was to keep them happy.

Weary from the abuse, the chains, and the lack of sleep, Jesus was dragged before Pilate. He could not have looked like much of a threat to Rome. Pilate tried to make sense of it but it made no sense at all. When accused by the Jews, Jesus did not answer. It was clear to Pilate the man was innocent of any crime against Rome. Pilate took Jesus inside away from the crowd and asked Him directly, “Are you the king of the Jews?”

A Different Kingdom
Jesus told Pilate about His Kingdom—it was of a different sort—a peaceable Kingdom of might and power and justice—not a Kingdom of this world—a Kingdom built not on lies or power but on truth. For ages we have been intrigued by Pilate’s answer,

The Governor tried to release Jesus but the people would have none of it. The wanted His blood, even if charged to their own accounts. In an ironic act of blasphemy the Children of Abraham confessed they had no King but Caesar.

Pilate gave in to their demands and turned Jesus over to the soldiers. He went by the book ordering Jesus to be whipped. The soldiers were as creative as they were brutal. They put a purple robe on Jesus and wove a crown of thrones and rammed it onto His head so recently bloodied by the sweat in the Garden of Prayer.

The soldiers led Him away to be crucified.

Scriptures:
Matthew 26:57-27:31
Those who had arrested Jesus took him to Caiaphas, the high priest, where the teachers of the law and the elders had assembled… Then the high priest stood up and said to Jesus, “Are you not going to answer? What is this testimony that these men are bringing against you?” But Jesus remained silent. The high priest said to him, “I charge you under oath by the living God: Tell us if you are the Christ, the Son of God.” “Yes, it is as you say,” Jesus replied… Then the high priest tore his clothes and said, “He has spoken blasphemy! Why do we need any more witnesses? Look, now you have heard the blasphemy. What do you think?” “He is worthy of death,” they answered. Then they spit in his face and struck him with their fists. Others slapped him and said, “Prophesy to us, Christ. Who hit you?”… Early in the morning, all the chief priests and the elders of the people came to the decision to put Jesus to death.
John 18:28-19:18 NIV
Then the Jews led Jesus from Caiaphas to the palace of the Roman governor…
Pilate … summoned Jesus and asked him, “Are you the king of the Jews?” “Is that your own idea,” Jesus asked, “or did others talk to you about me?” “Am I a Jew?” Pilate replied. “It was your people and your chief priests who handed you over to me. What is it you have done?” Jesus said, “My kingdom is not of this world. If it were, my servants would fight to prevent my arrest by the Jews. But now my kingdom is from another place.” “You are a king, then!” said Pilate. Jesus answered, “You are right in saying I am a king. In fact, for this reason I was born, and for this I came into the world, to testify to the truth. Everyone on the side of truth listens to me.” “What is truth?” Pilate asked. With this he went out again to the Jews and said, “I find no basis for a charge against him. But it is your custom for me to release to you one prisoner at the time of the Passover. Do you want me to release ‘the king of the Jews’?” They shouted back, “No, not him! Give us Barabbas!” Now Barabbas had taken part in a rebellion. Then Pilate took Jesus and had him flogged. The soldiers twisted together a crown of thorns and put it on his head. They clothed him in a purple robe and went up to him again and again, saying, “Hail, king of the Jews!” And they struck him in the face.
… When Jesus came out wearing the crown of thorns and the purple robe, Pilate said to them, “Here is the man!” As soon as the chief priests and their officials saw him, they shouted, “Crucify! Crucify!”…When Pilate heard this, he was even more afraid, and he went back inside the palace. … “Don’t you realize I have power either to free you or to crucify you?” Jesus answered, “You would have no power over me if it were not given to you from above. Therefore the one who handed me over to you is guilty of a greater sin.” From then on, Pilate tried to set Jesus free…But they shouted, “Take him away! Take him away! Crucify him!” “Shall I crucify your king?” Pilate asked.” We have no king but Caesar,” the chief priests answered. Finally Pilate handed him over to them to be crucified. So the soldiers took charge of Jesus.

Prayer:
Lord Jesus, help me walk worthy of You! My heart sinks at the thought of such injustice in the courts of men. You were not the one on trial that night and day—we were! Our sins were placed upon You. You drank all of the terrible cup of iniquity in the Garden. We could never atone for our sins so You atoned for us. You took the blows. You wore the thorny crown. You fell beneath the Roman lash—and all for love of us! Lord Jesus, help me walk worthy of You! Amen. (1 Thess 2:11-12 KJV)

Song:
He Could Have Called Ten Thousand Angels
Words and Music: Ray Overholt