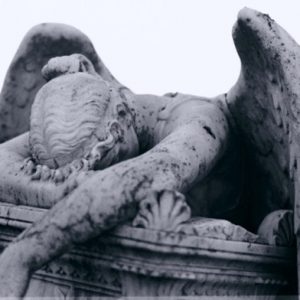 Tombs, when they are closed, hold their secrets.
Stories are finished whether they had a chance to end or not. Voices are stilled, left only to the dubious recordings of memory and subject to alteration by pain and preference. Eyes are closed. The heart is still. If there is a journey of the spirit that sets sail at the moment of death, there is no evidence of it inside the closed tomb.

At the tomb of Jesus, even the angels could not know what was happening after the stone was rolled into place by the soldiers. The holy creatures had stood before the Son of God in heavenly majesty, their angel hearts bursting with worship. He had sent them on countless angelic missions to aid the people of God. They had also served by only standing and waiting. Some of them sang to the shepherds. An army of them stood at the ready during Jesus’ earthly ministry, ready to rescue Him were he to simply kick a rock as a signal for them to charge.

Guardian Angels
As a child and young man, Jesus never called them so they had to watch as those around Him

For the last three years, angels had traveled with Him throughout Galilee and down to Jerusalem. They stood by as those He came to save

Now angels wept, unable to see into the tomb, having confidence in God but sorrow for their Master.

The Women Who Loved Him
In other quarters, human tears flowed from sources deep within. Just when the women thought there could be no more tears, another torrent of grief would break. They wanted Him back. They wanted to finish the work of caring for Him, at least for His body, all they had left of Him. But it was not really all they had.

In a place in their hearts deeper than the well of their tears, a tender of flame of hope flickered in slight but promising light. Unlike the men, the women had really listened to Jesus. They remembered those strange things He said about three days. Their wounded hearts yearned for tomorrow, the third day.

His Chosen Men
Hiding for fear of their lives, the disciples did not dare gather all in one place. They had broken down into their little clumps of friendships perhaps all in some proximity just in case. Unlike the women who could allow their tears to flow unhindered, the men pushed their grief deeper into their hearts while their minds raced to process some sort of action plan. But with Jesus dead, there was certainly nothing any of them could do.

Meanwhile, the tomb was closed, hiding its secrets.

“He Descended to the Dead”
For centuries, theologians have discussed what Jesus might have been doing on this Holy Saturday. One ancient belief is based on an interpretation of a few verses. It is romantic and appealing to the believer:

“Jesus entered the regions of hell, confronted Satan, wresting from him the keys of death, hell, and the grave. He then led the souls in the Bosom of Abraham, Paradise, out of their spiritual prison into the heavenly realms.”

Some believe this ardently, others oppose it with equal ardor.

What we all can do as we relive this Holy Saturday and the closed tomb, is join our tears to those of the angels and the women and wonder with the men what we must do next.

Scriptures:
John 19:38-42
Joseph of Arimathea asked Pilate for the body of Jesus. Now Joseph was a disciple of Jesus, but secretly because he feared the Jews. With Pilate’s permission, he came and took the body away. He was accompanied by Nicodemus… Taking Jesus’ body, the two of them wrapped it, with the spices, in strips of linen. This was in accordance with Jewish burial customs. At the place where Jesus was crucified, there was a garden, and in the garden a new tomb, in which no one had ever been laid. Because it was the Jewish day of Preparation and since the tomb was nearby, they laid Jesus there.
Luke 16:22-26
“The time came when the beggar died and the angels carried him to Abraham’s side. The rich man also died and was buried. In hell, where he was in torment, he looked up and saw Abraham far away, with Lazarus by his side. So he called to him, ‘Father Abraham, have pity on me and send Lazarus to dip the tip of his finger in water and cool my tongue, because I am in agony in this fire.’ “But Abraham replied, ‘Son, remember that in your lifetime you received your good things, while Lazarus received bad things, but now he is comforted here and you are in agony. 26 And besides all this, between us and you a great chasm has been fixed, so that those who want to go from here to you cannot, nor can anyone cross over from there to us.
Ephesians 4:7-8b
“When he ascended on high, he led captives in his train and gave gifts to men.”
Revelation 1:18 KJV
I am he that liveth, and was dead; and, behold, I am alive for evermore, Amen; and have the keys of hell and of death.

Prayer:
Lord Jesus, I believe the words of the ancient creed! The stillness of the Garden Tomb hid Your deeds on that Saturday. You descended to the dead! You led captivity captive. You rescued the Old Covenant saints! The countless innocent lambs and goats and bulls counted at last for the redemption of the faithful when You, the Final Lamb, the Lamb of God, gave Your life! You hold the keys to death, hell and the grave! You are the Victor! You robbed death of its sting and plundered the grave of any victory. I will be silent today and weep with the angels, but I will weep in hope that tomorrow is the third day! Amen and Amen!

Song:
Were You There?
Traditional African-American Spiritual