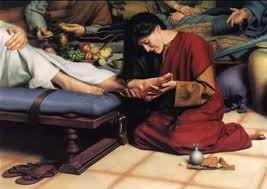 It was a large house, signifying wealth, but it was also a warm and welcoming house, signifying wealth of a more substantial kind. Martha ran this house she shared with her sister, Mary, and her now famous brother, Lazarus. It didn’t matter that Jesus traveled in such a large company. Martha was always up to the task because she kept her focus on Jesus. Those fishermen could make do the best they could; Jesus was the one who mattered. He must be made comfortable. He needed his rest from these daily forays into Jerusalem.  On this night, Mary, Martha’s sister, the quiet one, suddenly rose from her accustomed position at Jesus’ feet. No one paid her any mind as she left the room or when she returned.

The aroma of the contents of a broken alabaster jar filled the room.
Few of the men noticed as Mary produced this jar of ointment, a concoction ripe with pungent scent. The men were busy talking, eating. Only Jesus saw her steal away to her hiding place, find her most precious possession, break the container and lovingly anoint his feet with the spice. But the aroma gave her away, pulling back her curtain of privacy and thrusting her to the public stage.

The other men were not pleased.
They rebuked her. This simply was not the best way to use this valuable commodity. It was worth a year’s wages to the common man. Once committed to this line of reasoning, an alternative use had to be proposed. Let’s see, ah yes, the poor, always a handy cause to plead to gain the Master’s favor. The air was heavy with the smell of the ointment and with anticipation of how Jesus would handle this foolish woman.

Around that table were men whose names would become known throughout the world for centuries to come. At this moment they were obscure little men with glimmers of greatness that only Jesus could see.

This was a diverse group, hand selected, not for what they were, but for what they could become, if they centered their lives on God. All were silent now, waiting for Jesus to answer their question. Mary had wasted a valuable resource, hadn’t she?

“Leave her alone,” Jesus said. “Why are you bothering her? She has done a beautiful thing to me.”

He went on to say that she had done what she could, that she had anointed His body for burial, and that wherever the Gospel is preached, her story would be told. The men were ashamed. He had taken the woman’s side over theirs. But as they listened, something began to stir within them. It always did when He spoke. Soon, their embarrassment was forgotten and before long all but one was wishing that he had something valuable to pour over Jesus’ feet.

Scriptures
John 12:1-8; Mark 14:3-9
Jesus arrived at Bethany, where Lazarus lived, whom Jesus had raised from the dead. Here a dinner was given in Jesus’ honor. Martha served, while Lazarus was among those reclining at the table with him. Then Mary took about a pint of pure nard, an expensive perfume; she poured it on Jesus’ feet and wiped his feet with her hair. And the house was filled with the fragrance of the perfume. Some of those present were saying indignantly to one another, “Why this waste of perfume? It could have been sold for more than a year’s wages and the money given to the poor.” And they rebuked her harshly. “Leave her alone,” said Jesus. “Why are you bothering her? She has done a beautiful thing to me. The poor you will always have with you, and you can help them any time you want. But you will not always have me. She did what she could. She poured perfume on my body beforehand to prepare for my burial. I tell you the truth, wherever the gospel is preached throughout the world, what she has done will also be told, in memory of her.”

Prayer:
Lord Jesus, in the quiet moments of life, let me learn to sit at Your feet like Mary of Bethany. When it is time to work, let me learn to manage life’s kitchen like Mary’s sister, Martha. Through all of life, help me remember the tomb from which You called me, like their brother, Lazarus. The grave clothes gone, let me inhale the free air of grace that is Your presence. Above all, please be welcomed in my heart at all times, like the house at Bethany. All for You, Lord Jesus, All for You! Amen.

Song:
Broken and Spilled Out
Words and Music: Bill and Gloria Gaither

Verse 2:
Lord You were God’s precious treasure
His loved and His own perfect Son
Sent here to show me The love of the Father
Just for love it was done
And though You were perfect and holy
You gave up Yourself willingly
You spared no expense for my pardon
You were used up and wasted for me