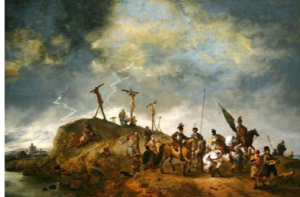 Tools of the Trade
The Roman implements of torture and execution were tools of the trade for the soldiers of the Empire. Iron was expensive, whether the sharp bits lodged in the tentacles of the whip that tore the flesh of prisoners or the sharp pointed nails that split the hands and feet of their victims, precious iron had to be cared for and cleaned. A carefully maintained whip and supply of crucifixion nails could do their duty on many a criminal’s back and fasten many a rebel to the wood.

But the Roman soldier knew nothing of germs and microbiotic residue. Each new flogging carried with it all the ones who had gone before. Each fresh use of a set of nails was not at all fresh. But what did that matter? In a few days each one crucified would be just so much rotting meat, food for the birds, until whatever was left was taken down.

Such was the business of a place called Calvary.
This Place of the Skull warned of Roman justice to those who would take up arms, even if only treasonous words, against the Empire. Fear was the theme of this theatre. Guilt or innocence was not an issue; order was the point. Stay in your place, you wretched Jews. Worship your one God in your Temple and tend to your ancient ceremonies and chants. Speak against Rome and Calvary is your destiny.

The Cross of Christ
To this place an innocent Man came, condemned, bleeding from the whip, crowned with twisted branches from a thorn bush, carrying a heavy cross.

The Gathering Storm
Their work done, the soldiers divided their spoils while enjoying the suffering of another rebel against Rome. They joined those in the crowd in their lame insults, each of which yielded more laughter that it deserved. They all pretended not to notice the dying of the light in the approach of the storm. This tempest was not coming from west to east but from all directions at once. It seemed to be linked to a storm deep within each witness of these events.

Jesus spoke from the cross, His voice lost in the abuse hurled at Him and heard only by those who were listening. Yet His words have lasted longer than any storm, piercing though all of the noisy crowds who still today relentlessly come to mock Him.

At last, with His last breath, He declared.

Salvation’s price had been paid.
All the whips and nails of a hostile humanity proved unable to still His voice or to stem the flow of His life-giving blood. The sin barrier was forever broken so there was no longer any need for God to separate Himself from the people He loved. The veil in the Temple ripped from top to bottom, opening a new and living way. And nothing can ever change this.

Indeed the whip and the nails were infected by all who had known them before and by all of us. They carried the disease of sin and the blood they spilled is the only cure.

Scriptures:
Matthew 26:57; 67-68; 27:1-2; 27-31-40; 45-46; Mark 15:36-38; John 19:30:
Those who had arrested Jesus took him to Caiaphas, the high priest, where the teachers of the law and the elders had assembled. Then they spit in his face and struck him with their fists. Others slapped him and said, “Prophesy to us, Christ. Who hit you?” Early in the morning, all the chief priests and the elders of the people came to the decision to put Jesus to death. They bound him, led him away and handed him over to Pilate, the governor.

Then the governor’s soldiers took Jesus into the Praetorium. They stripped him and put a scarlet robe on him, and then twisted together a crown of thorns and set it on his head. They put a staff in his right hand and knelt in front of him and mocked him. “Hail, king of the Jews!” they said. They spit on him, and took the staff and struck him on the head again and again. After they had mocked him, they took off the robe and put his own clothes on him. Then they led him away to crucify him.

They came to a place called Golgotha (which means The Place of the Skull). When they had crucified him, they divided up his clothes by casting lots. And sitting down, they kept watch over him there. From the sixth hour until the ninth hour darkness came over all the land. About the ninth hour Jesus cried out in a loud voice, “My God, my God, why have you forsaken me?”
One man ran, filled a sponge with wine vinegar, put it on a stick, and offered it to Jesus to drink.

When he had received the drink, Jesus said, “It is finished.” With that, he bowed his head and gave up his spirit. The curtain of the temple was torn in two from top to bottom. And when the centurion, who stood there in front of Jesus, heard his cry and saw how he died, he said, “Surely this man was the Son of God!”

For Fridays
The Book of Common Prayer
Almighty God, whose most dear Son went not up to joy but first He suffered pain, and entered not into glory before He was crucified: Mercifully grant that we, walking in the way of the cross, may find it none other than the way of life and peace; through Jesus Christ Your Son our Lord. Amen.

Song:
The Day He Wore My Crown
Words and Music: Phil Johnson

The city was Jerusalem The time was long ago
The people called him Jesus The crime was the love He showed
And I’m the one to blame I caused all the pain
He gave Himself, the day He wore my crown

He brought me love that only He could give
I brought Him cause to cry
And though He taught me how to live, I taught Him how to die
And I’m the one to blame  I caused all the pain
He gave Himself, the day He wore my crown

But He walked right through the gate And then on up the hill
And as He fell beneath the weight He cried, “Father, not My will.”
And I’m the one to blame I caused all His pain
He gave Himself,  the day He wore my crown.