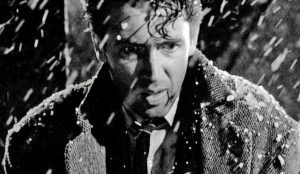 It Really Is a Wonderful Life–But…

In the opening sequence of this well-known classic film, two angels are discussing the case of one George Bailey, of Bedford Falls, in upstate New York.  Stars throb as the angels speak.  He is in trouble and people all over town are praying for him.  Clarence, the bumbling angel assigned to this case, asks, “Is he sick?”  The superior angel corrects him, “No, worse.  He is discouraged.” And the story unfolds from that point.

With my whole heart, I agree!

I have been sick and I have been discouraged and discouragement is worse.  When we are discouraged, we need words.  Not just any words.  Certainly not pessimism, or “realism,” or even practicality.  The words needed are words of faith, words that elevate the downcast eyes, bolster the faltering mind, and steady the stumbling steps.  Encouraging words, empowering words, enriching words, these are the words that are needed.  Words of life, of health, of peace, of faith, of hope, of charity, words that have their source in the Word of God.

For those who would follow the Lord Jesus in this life, courage is an absolute requirement.  When the power was shifting from King David to King Solomon at a crucial time in Israel’s history a profound statement was made by the older man:

1 Chronicles 28:20 NIV
David also said to Solomon his son, “Be strong and courageous, and do the work. Do not be afraid or discouraged, for the Lord God, my God, is with you. He will not fail you or forsake you until all the work for the service of the temple of the Lord is finished.

“Be strong and courageous and do the work.”
This word came to me at an extremely critical time.  I was serving the church in Winston-Salem, NC and had reached the 10+year mark in my study of worship.  I had prepared and was teaching a class called “Worship that Pleases God” that organized and presented what I had gleaned from the Bible about worship.  The class was a great success and I had a deep conviction that I should write the lectures into a book.  The thought of writing a book was intimidating for two reasons:

My first attempt was a bust; I failed.  I reached a point of about 60 thousand words and was not half through!  It would be much too large for a first book.  The form I had chosen was flawed.  I knew I had to start over.  This stopped me cold for about six months.

Late that summer, we took our family vacation to the beach.  Early on Friday morning, I was still in bed reading again the story of David and Solomon and that critical transfer of power.  I was deeply discouraged.  As I read, the words of the dying King David became a Word from the Lord to me:

“Be of good courage and do the work you have received from the Lord for the House of God.”

These words began to pour courage into me to start again with a new form.  In those days pastors did not have computers in their offices but my secretary had one.  I decided to go to the office at 4:30 each morning to write at my secretary’s computer.  This early morning time became a delightful rendezvous with the Lord.  The book took shape and then took off.  A word from the Lord rescued me from debilitating discouragement and filled me with the courage I needed to do what God had called me to do.

An Encouraging Word
The truth is, every servant of the Lord will face setbacks and disappointments. The Lord uses these things to instruct us and we know that the trial of our faith makes us stronger, eventually increasing our courage.  Therefore, to discourage a brother or sister is to rob from them the very thing he or she needs to effectively serve the Lord.  Conversely, to encourage someone is to provide him or her with the very thing he or she needs to live his or her life to the fullest, that is, to please the Lord.

My personal history leads me to mark well the encouragers in my life.  Chief among them was my father, J.D. Phifer.  He was renown for encouraging young people; it was the mark of his lay ministry in my home church.  I was blessed with great a pastor and wonderful teachers who encouraged me as I grew up.  As a young minister when the struggles of life mounted in my life, certain friends were constant sources of encouragement. Chief among them was Rev. Jackie Brown, who was taken from this earth much too soon.  On his deathbed, Jackie imparted to me a gift.  It took me some time to understand what that gift was and then, I knew.  It was his gift of encouragement. To be around Jackie was to be filled with the exciting prospects of what God had called me to do.  He made me feel like I could really do the work!  So, from my father and from best friend and from the Lord I have a commission to encourage.  That’s what a worship leader does, what a music director does, what any type of minister does–function as a encourager. 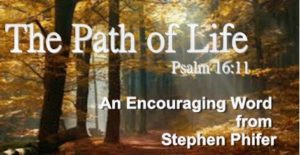 Here is the link: https://wordpress.com/view/pathoflifedevotions.com

I want to be an encourager in your life!

Toward this goal, I invite you to consult the “The Path of Life Daily Devotional.”  At present these devotions tell The Jesus Story and include an episode from the Gospels with a single word title, selected scripture readings,  a topical prayer, and a song–words, encouraging words.  The devotions are seasonal on this plan: 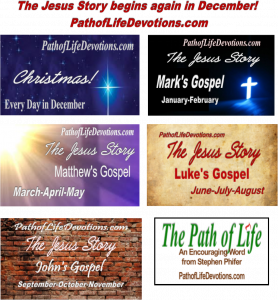 So, when you find yourself discouraged, when life seems  almost too much to bear, when a “George Bailey” moment comes your way–come walk the Path of Life!  The words of God will lead you back to courage: “Be strong and courageous, and do the work.”

Psalm 16:11 NIV
You have made known to me the path of life; you will fill me with joy in your presence, with eternal pleasures at your right hand.

Discouraged! When Life Is almost too Much...