White Man, braving the surging sea in wooden ships too small for the task, driven by winds caught in canvas, steering by stars cold and remote, and seeking freedom to worship and work, came to these shores.

Black Man, treated as cargo, crammed into shrunken holds, the living, the dying, and the dead all chained together in vile bondage, sailing those same seas, not by choice but with courage of his own, came to these shores dreaming of freedom. Fresh memories of sylvan sanctuaries and vast savannas where life and death dramas unfolded every day in which he was a leading player, did little to prepare him for the fields and mansions of America where he would hoe and harvest, bow and scrape, and live and die like a beast of burden.

White Man, merging the Bible and English law into a new constitution binding thirteen colonies into thirteen States, loosed his craftsmanship and creativity to forge a nation from the wilderness, like an army of Adams taming a new Eden.

Black Man, voiceless in these proceedings, powerless beyond his own aching back, his own proud soul silent beneath the whip, did his work, enriching White Man and receiving little but grief in return.

White Man, deliberately blind to the contradictions in his founding documents, calculated the value of each Black Man, Woman, and Child, as a mere fraction of a White Man’s worth before the law.

Black Man, suffering under White Man’s lash, was restricted by law from the Bible. Amazingly, Jesus found him!  Black Man saw the difference between the real Truth and the distorted version of the Truth in the White Man’s religion and started to sing it.  The fields rang with the Gospel sung as work songs to shorten the day, to ease the torture of the Delta sun, and to sooth the fears of the dark southern night.  He heard about Moses and Pharaoh and found therein a promise of deliverance. “Let my people go!” became his song and prayer.

White Man, dividing north and south, the south choosing humans as machines and the north inventing mechanical means to do the work needed, constructed competing economies, incompatible in their essence, ensuring conflict to come.

Black Man, somehow surviving and even strengthening under the lash, politically powerless but mighty in human spirit and in the godly hope of deliverance—the promised year of Jubilee must come someday!—grew in numbers, striking fear in the heart of the southern White Man.

White Man, north and south, put on new colors, blue and gray, to fight it out. Four years and 600,000 lives later, the White Man’s south was gone forever, and his north was in command.

Black Man was free but suddenly beset by the need for skills beyond those provided by the plantation.  God-given intelligence and the reality of freedom brought many to hope in an America busily reconstructing itself.

White Man in the south, if he survived the carnage, soon regained power and found legal substitutes for slavery, Jim Crow and peonage, a personal and economic bondage enforced by White Man’s badge.  The myth of White Supremacy ruled the culture, north and south, riding at night under white hoods.

Black Man migrated north in huge numbers, leaving the invisible chains of the south to those who could not leave. Trapped in these cultures enterprising Black Man flourished in segregated communities in the cities while his rural counterpart saw little difference in the old and the new versions of slavery.

White Men, as the 20th century began, went to war with each other in Europe.  They fought over the colonies where men of other colors were their economic subjects.

Black Man, in a stroke of irony, traveled back across the Atlantic from these divided American shores to the White Man’s war in Europe to fight for the country that had enslaved him, freed him, and ignored him.  He returned to America with a taste for freedom and a skill with defensive weaponry.

White Man’s cotton crop down in Arkansas was a windfall because of the War-to-end-all-wars with one small problem, the share earned by Black Man was more than he, by the old rules, should have.  His percentage contradicted his assigned “place.”

Black Man, though fully capable of self-defense, sought peaceful, legal means to receive what he had been promised, meeting at a church in south Phillips County to form a union.  Armed guards stood watch.

White Man approached in a car and fired into the church, killing those who could not escape. Black Man shot back. While one White Man was killed and another wounded in the confusion, the next day the real killing began.  Mobs of White Men marched south from Helena to squelch the “riot.”  White Soldiers from Little Rock joined them with machine guns firing from boxcars.

Black Man could not run, could not hide, could not escape the armed, angry, antagonized White Man. Untold numbers of Black Men and their families fell like a harvest before a scythe. The fields, white with new cotton, ran red, a harvest of hate and fear. Black Man’s homes were looted and burned, his hard-won possessions stolen.

White Man, after the killing, began to tell lies:  fake evidence of a call for rebellion, tortured confessions in the gleaming new red-brick, white-columned courthouse, (the symbol of justice) and sham trials efficiently conducted. 12 Black Men were sentenced to die. By the score, others made plea bargains for lesser sentences.

Black Man, a self-taught attorney, Scipio Africanus Jones, took up the case, skillfully negotiating the appeals all the way to Washington, D.C. and the US Supreme Court.  Though it was presented to the court by others, his defense won the day—three years later.

White Man, instituted a thorough cover-up, promising to resume the slaughter if Black Man told others what had really happened.  He invented a misnomer for this horrid, multi-layered sin, “The Elaine Race Riot.” It was never a riot. It was never even a battle.  It was a slaughter.

Black Man kept it quiet, relinquishing the slaughter to oral histories among families and friends. Many left Arkansas never to return.

White Man in the 1950’s and 1960’s, in the government, in the courts, and by force of law in the schools, began at last to address the southern myths: “negro inferiority,” “separate-but-equal,” and “in-their-place.”

Black Man began to emerge from the shadows of poverty into the slow dawn of education and opportunity.

White Man, as the 21st century began, finally started to hear the truth.  Historians extracted the fearful facts from the foul fiction and rightful shame sprouted like a healing flower in our hearts.

Black Man watched to see if anything would really change.

White Man, 100 years later, across the street from the now 105 year-old courthouse, erected a monument of remembrance to the slain presenting an understated history of the compound sins of the Elaine Massacre of 1919.

Black Man and White Man come together, today, at this altar, in remembrance, repentance, and renewal, no longer fearing, or suspecting, or hating each other, seeking peace and that promised year of Jubilee.  Surely it has come at last.

Stephen Phifer was born in Helena AR in 1949 and graduated from Central High School in 1967. His Arkansas education, including college at U of A, Monticello, prepared him for a life in Christian ministry and music education. He continued his studies at The Wichita State University, MME-1986, and The Robert E. Webber Institute for Worship Studies, Doctor of Worship Studies-2004. He is now writing and teaching on issues of Christian spirituality with two websites: StevePhifer.com (The Worship Renewal Center) and PathofLifeDevotions.com. He administrates a prayer initiative on Face Book called Healing Helena: https://www.facebook.com/PrayforHelenaWestHelena/ 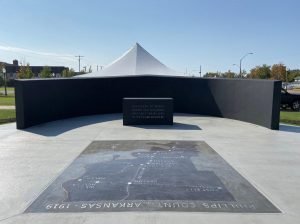 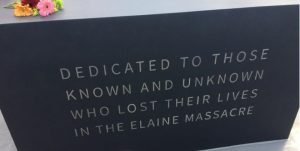 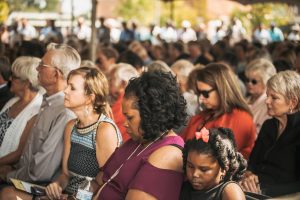 For a New York Times piece on the Elaine Massacre and the events in Helena and Elaine go to: https://tinyurl.com/y27edmpz

A Memorial to the Victims of the Elaine Massacre of 1919